Atlanta during fall is really great! Lot of sun and warm weather.

I really enjoyed cycling and running around the city. You can relax in Piedmont Park which is the biggest park in Atlanta. From there, people run and hang out on the Beltline, a former railway transformed into a pedestrian path. Also, really good bars and breweries stand along this path. 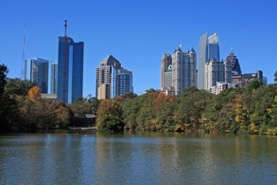 On the photo above: Piedmont Park

If you like some history, you can visit the Jimmy Carter center, which celebrate the President who is also a GT alumni, or the Capitol, which explains the history of Georgia and how politics works in the country!

Going a bit further, you can’t miss Edgewood and its neighborhood! That’s where Martin Luther King was born. Now, during the day, you can visit the memorial and by night, it’s one of the best places in Atlanta with really fun bars such as the Sister Louisa. Plus, for brunch and punch lovers, you can spend your whole Sunday afternoon listening to music and drinking in there.

In the summer and beginning of fall, there are lots of music festival across the city, in every park, where you can spend some great time.

Going back to downtown, Centennial Park is at the heart of the city. It was built for the 1996 Olympics. Lots of museum are around that place such as the famous World of Coca Cola (where everyone goes while in Atlanta) or the aquarium. But it gathers also a lot of people during Hawks (basketball), Falcons (football) or Atlanta United (soccer) games. 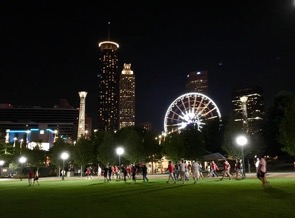 On the photo above: Centennial Park by night

Indeed, the stadiums are just across the street. And, in the US, you can’t miss sports games. Also, you should at least see a game in the brand-new Mercedes Stadium, which is just amazing! For soccer fans, the hometown team won the MLS championship while we were on campus and they have amazing supporters. 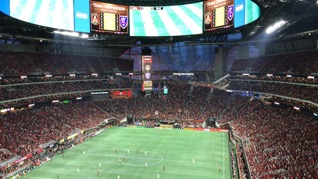 On the photo above: Atlanta United soccer game at Mercedes Stadium

Finally, the US is also all about food! My favorite doughnuts are in Homepark at Sublime Doughnuts. Midtown is also a great place to find restaurant, with excellent southern dishes.